skip to main | skip to sidebar

Bye-bye silence and hello voice!  We have taken the - rather large - step from full masks to half masks... from 'silent' masks to speaking ones. Exciting yes - but it is interesting how long it took to let - or get - the voice out - we kept forgetting.  Literally.  Oh god - I can speak.  Say something... say something... anything!  Right.  What should I say?  Eee.

There is something tremendously intimate about ones voice - it can be quite exposing if it is not masked so that it no longer feel like your own voice.  In other words if you are not using a resonance with enough distance from your own speaking voice, it is very difficult to get into the state of the character you are looking for.  Because it is in this distance that one finds 'play' - where you start to say things that you wouldn't normally say... but rather things the character would say... and in the rhythm that the character would say it...

Then, naturally, you need a body which is also masked with a specific shape and given a specific vibration or frequency.  We did a lot of this with full mask.  Full mask is all about physical state (among other things of course) - like how you stand, which part of the body leads and so on...  Frequency is often inspired by materials... glass, rubber, wood, metal, oil and so on...  Where, if you imagine that you are made of that material it effects how you do things.  I, for example, have a better time playing characters with a high frequency, with lots of little fast erratic movements... I feel quite challenged by characters that are more grounded or more liquid.  But materials really help you understand what you need to do physically without getting all psychological about the character.  Where feedback can be - more wood - less rubber!  And everyone understands what is required practically.  How simple?  Mmm.

So, put these together - a masked voice with a masked body with a specific vibration and you find yourself in an altered state... in the state of the character you are playing.  Hopefully.

Sometimes you're lucky and you hit all three rather quickly - but more often it takes some time.  Giovanni keeps telling us... once you are in 'the state' and if you fall into the creative flow and you are listening, it is the state that tells you what to do next.  This is the endless endeavor of improvised work...  What happens?  What happens next?  And then what happens?

It's not easy.  Or simple.  Because things that look easy and simple are actually very hard to find.  And especially in mask.  If you don't listen, often you panic,  do too much, saturate your performance and ruin the scene.  Which is not great.  Obviously.  And everyone is swimming around in soup.  Wondering what went wrong.

But when it does happen, you have the opportunity to open the door to a whole other world... where firemen fall in love in a crazy piece of sketch comedy... where birthday wishes are lost in a moving piece of tragic comedy... or where typical human behaviour is revealed at the day on the beach.  Dramatic depth can be found in the action of simple every day things.  And it is in the action that the sentiment is revealed.  And the action is seen through very strict action and reaction with your co-players.  A delicate dance of technique and sentiment - and without one you don't have the other.  Although more often than not we'll forgive lack of technique over sentiment.  As Matteo says without sentiment your mask is nothing more than paper mache and elastic.  Theatre.  Poetry.  Life perhaps.


And the thing is with mask, it demands such a high level of play - such a specific and clear state - in order to work.  And either it works or it doesn't.  That's it.  It's completely unforgiving.  Luke warm is not really an option.  So the training is how to be so specific that the state does the work for you in a sense.

The first half masks we played were simple mono-directional expressive masks that Matteo made... with the most fantastically expressive eyes.  Yay.  They are wonderful!  What fun.  But because they are so simple and have such a specific dynamic - they are really not easy to play.  You have to be so... specific!  Yes.  Ahhhh.

So yes... on this journey of mask work I think the thing that is becoming clearer, is in theatre ultimately everything is masked - even if you are not physically wearing a mask.  Deep.  In the end even the story is masked through theatrical transposition.  If not - you might as well watch TV.  Exactly. 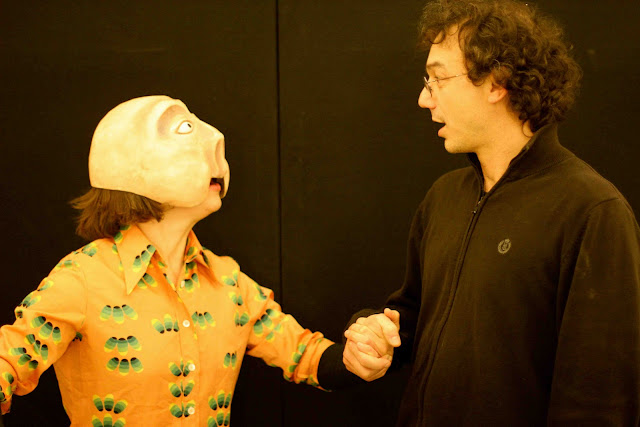 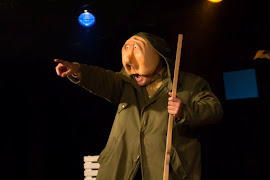 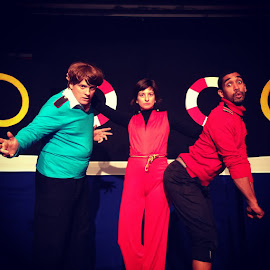